What Would You Do?

Maybe it’s the nature of inspiration, but inspiration always comes when I’m not looking for it. Recently, it came in the form of a helicopter tour that was a dream come true for a dear friend who didn’t expect to see her 50th birthday.

Kim was struck at 29 with Scleroderma, an autoimmune disorder where the immune system mistakenly attacks and destroys healthy body tissue. She had to abandon her burgeoning career in Hollywood, stop her regular overseas adventures, and move with a friend-turned-caretaker to a woodsy enclave on the North Coast to live out whatever time she had left.

Dropping to 85 pounds and with progressively worsening symptoms, Kim shared with her doctor a suggestion her sister made: how about trying Tetracycline — maybe an antibiotic would lower her overactive immune system. Kim’s doctor couldn’t see a reason not to try it. Gradually, there was a pronounced improvement in Kim’s health, and within months she was back on her feet — albeit with an oxygen tank in tow when she went further than the next room — and her weight increased to a healthy low. The disease appeared to have gone into remission, but its scarring effects would take their toll.

Kim is a do-er, and even while she rested in the sheltering refuge of the redwoods, unsure of her future, her spirit was lively and her interest in learning still strong. It was the mid-1990s, and Kim taught herself Pagemaker on the computer. Why not? She was clever, patient and artistic. Once she was clearly regaining stamina and had moved into a house in town, Pagemaker opened new doors. She was hired at a local feminist newspaper doing layout. A new chapter in her life had begun.

The next spring I met Kim in a stained-glass class at the community college. I laugh about how she made two window hangings in the time it took me to make one. I liked her sense of humor, her concern about the recyclability of the metal waste we were producing, and her doggedness to get out and learn a new art even though the box of glass we had to carry was heavy and she had to pull an oxygen tank on wheels. It put my little problems in perspective.

When she turned 40 in 2003 Kim the rented a community hall and threw a big casino party. She had made it, and she was pulling out all the stops. Plus, she loves gambling. And waging bets on survival had taken her far.

It’s a decade later, and Kim turned 50 this January. In December I asked her what she wanted to do for this landmark birthday. Travel has always been at the top of her list, but logistics, altitude and lengthy airplane flights take a toll on her decreasing lung capacity and compromised heart function, so she had to look beyond the obvious. What else could she do? 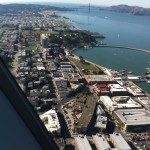 Turning 50 is a big deal for anyone, and for Kim it’s a triumph. She’s mobile because of her ingenuity with a portable bi-pap machine she plugs into her car cigarette lighter or portable battery, and she lives day and night with the help of that breathing machine and her bright spirit. I’ve never once heard Kim complain. I think it’s partly why she’s still here: she lives the glass half full. And what could be a better way to celebrate life and the beauty of the world than to take a helicopter tour of the San Francisco Bay on a crystal clear day in January? Here was the joy of travel condensed into a half-hour specular thrill and she could go to bed that night at home.

Sure, there are limits for us all, but inside of those limits is a lot of air space. Look at Kim. She plugs the bi-pap into the cigarette lighter and hits the road. She grows seedlings under lights and plants a huge garden every May. She cans tomatoes and makes chutney and pickles after harvest. She writes a blog on thought-provoking topics. For her 50th she boards a helicopter and gets to travel again for a glorious, unforgettable time.

As poet Mary Oliver put it so well: “Tell me, what is it you plan to do with your one wild and precious life?”