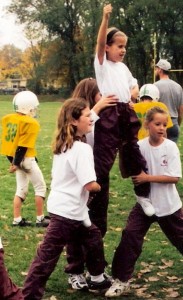 Brianna lived in a large house in a woodsy suburb with her older sister, her stay-at-home mom, and her dad, a businessman. It was a developing area, and she saw open fields become housing developments and the main mall.

Until my sister was 13 and wanted to go the mall with her friends and do teenage things, we were inseparable. She loved carrying me around and pretending I was her daughter. We played house and played with our Beanie babies, Bitty Babies and American Girl dolls. Two really good friends lived next door and we played Kick the Can and kickball with them and other neighbors and a made-up game that somehow involved a hula hoop.

In third grade we got new Apple computers at school and computer class started as soon as we finished learning handwriting and cursive. Once a week we got to do activities on the computer, including learning to type. I was already playing computer games on our family computer at home, like Putt-Putt and a Barbie game where you had to solve some sort of crime, so I had an idea of what was going on. Most of my friends had a family computer. We also had TV video games like Nintendo 64, and I had an original black and yellow Game Boy and one in color. I went through phases with my Game Boy and either played with it a ton or didn’t play it at all.

I took jazz dance, tap and ballet classes, swimming lessons, club soccer, and gymnastics, but I gave up dance and soccer to focus on gymnastics because I liked it a lot and I was good at it. I also liked stunting. I was small, so I was a flyer — one of the girls the other girls would hold up in the air.

In third grade I tried out cheer with a good friend. The varsity cheerleaders were our coaches that first year, which we thought was pretty cool. We had practice once a week and during football season we cheered at Saturday games, or whenever our assigned team played.

Stay posted for the LAST sneak peek into “100 Years in the Life of an American Girl” (the 2000s) before it publishes. Be sure to subscribe to my newsletter for publication updates, book pre-order info and to enter the drawing I’ll have May 31st for a FREE BOOK!