“Wartime Comes to the West Coast” — from Chapter 4 of my upcoming book, “100 Years in the Life of an American Girl: True Stories 1910 – 2010.” The book will be a rare view inside the lives of over 50 young girls from around the country and throughout a century. While the book is in production, I’ve decided to share a taste of these fabulous stories by giving a little peek into one chapter a week for the next 10 weeks. Enjoy! (publishing 2013) 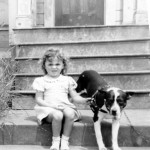 Sharon lived with her mother in a Northern California port town known as the foggiest place in the United States. Her parents had divorced after Sharon was born and her father joined the Army soon after Pearl Harbor was bombed and the U.S. entered World War II. Her grandmother came to live with her and her mother, who had started working to support the war effort. Sharon was 4 years old.

My mother was a real Rosie the Riveter, joining the new female workforce as a welder, helping construct a floating dry dock called The Ability. The dry dock was a long, movable metal dock that was shipped out to ports like Hawaii where it could float offshore and be a place to dock large battleships when there wasn’t room at shore. When the dry dock was finished and shipped off, she took a job in a parachute factory tying the silk ropes that held the top of the parachute. She was proud to work in jobs usually filled by men and at night showed me her pasty fingers from holding her hands in the air tying cords. She was sad to eventually have to quit because of nerve damage in her fingers.

I heard my mother talking with friends about how, two weeks after the attack at Pearl Harbor, the Japanese had blown up a ship just off our coast. Military installations immediately constructed a new airport and blimp base, and sea planes and blimps flew constant patrols over us. Antisubmarine patrols swam outside our shores watching for any sign of the enemy. The streets of Eureka were packed with brave soldiers and sailors who had come to protect us.

My mom worried a lot about Uncle Alan, who was overseas fighting the Japanese in New Guinea. As soon as she got home from work every day she rushed to check the mail to see if he had sent a letter. She sat up at night drinking coffee and praying he would stay alive, especially after my cousin Mike got killed.

Everyone joined in to help our soldiers. We bought and ate less of certain foods so the soldiers could have more. Even I didn’t mind going without sugar and other stuff. I understood our soldiers needed the food to be strong enough to win the war.

Sirens sounded every few nights, warning of a possible air raid. My mother would pull the blackout curtains and rush around turning off all the lights, then grab me and we’d huddle in the dark. I knew bombs could drop from the sky, land on our house and kill us, and I was scared. Sometimes I’d cry and she would hold me tighter and tell me it would be over soon. It was a relief when the all-clear whistle blew. Mother would wipe my tears and we’d laugh, relieved until next time.

Sharon went to the grocery store with her grandmother and watched her trade ration stamps for sugar and meat. When the store was out of sugar, which was often, the stamps could be traded for stew meat.

We had only three things on our minds: war, war, and war. When I wasn’t with the grownups I played war games with the kids next door. Our guys shot it out with Tojo, Hitler, and their troops. We got even with the bad guys who were trying to kill us.

All over town, big signs posted about the war showed Uncle Sam — our very own Uncle America — teaching us what to do to help win the war. One sign my mother and grandmother liked a lot read, “Come On Okies, You Can Take Japan, You Took California, Without Losing A Man.” They thought it was funny because lots of people from Oklahoma came to California during the Depression, they said — whatever that was. I laughed with them.

A lot of silly things happened during the war, too. My mother brought home stinky cold-wave home permanents to make my straight hair curly so I could look like Shirley Temple. When it dried I had to admit I did look a lot like Shirley Temple, who I didn’t particularly like. Then my mother showed me off at every opportunity. She arranged singing engagements for me on city bus rides when the buses were filled with sailors. She looked like Susan Hayward with her red hair, so naturally we were surrounded by eager sailors who moved their seats from the back of the bus to be near her. After their exchanges of hilarity I had to stand in the aisle looking like Shirley Temple and singing away.

Stay posted for the next sneak peeks into “100 Years in the Life of an American Girl” before it publishes (the 1990s and 2000s). Publication’s getting closer! Be sure to subscribe to my newsletter for publishing updates, book pre-order info and to enter the drawing held this May for a FREE BOOK.