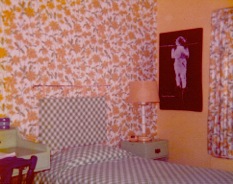 Kim was born in 1963 into a family she describes as “arch conservatives and budding hippies.” Her parents were older than most: when she was born, her father, a WWII veteran, was in his late 40s and her mother, a British war bride, was 43 years old. Her older sister moved out and her brother went away to college when Kim was small. In ways, it was the life of an only child.

TV was a big part of life at home. My parents were devoted to the NBC nightly news, with David Brinkley. Story has it that one night after the blessing of the meal, from my high chair I said, “And good night from NBC news!”

Some early mornings I lay on the living room floor in front of the TV waiting for morning cartoons to start. When I was a bit older I watched reruns of “Father Knows Best, “My Three Sons, “The Munsters, and “The Andy Griffith Show, and shows like “The Adams Family, ““Bewitched,” “I Dream of Jeannie,” “Gilligan’s Island” and “Flipper.” Every day they would announce how many of our troops had died in Vietnam that day. I didn’t understand death yet because it hadn’t touched me personally, but I knew people were upset because I heard about protestors. During the afternoons my mom would say, “Turn off the TV and go out and play!” At night, with my parents I watched Masterpiece Theater and the Smothers Brothers, the Sonny and Cher Show, Carol Burnett, Laugh-In and Glen Campbell specials.

Hippies were a part of life at home because my sister was one. Sometimes she’d call from somewhere and ask for money for some harebrained thing like buying into a commune in Nova Scotia or wanting money to travel with some friends to learn weaving from the Indians in the mountains of Guatemala. She would visit now and then with a long-haired boyfriend and refuse to eat Mom’s food because she was vegetarian, which disturbed Mom no end. My sister would cook weird seaweed things on the stove, which also upset our mother because it was smelly. One Christmas my mother gave her a very hippie-looking suede and knit jumper. “I can’t wear that!” my sister cried, when she saw it in the box. “It’s made of animal flesh!” My parents threw up their hands. I got the jumper.

I thought hippies were great. They were colorful and kind and one of my sister’s boyfriends played guitar for me. No one had ever done anything like that for me before.

Women’s Lib was around me, on the news all the time. I thought it was bad because there were violent reactions and people carrying posters reading “Bra Burners” and “Men Haters.” My parents weren’t for or against women’s lib, they just thought the women were going about it the wrong way. Too radical, I guess.

But none of it was really my concern. I had my own problems: playground politics. I didn’t realize how related it all was in a certain way. Since pre-school, I had preferred playing with boys and didn’t hang around with girls playing house and playing with dolls. I liked climbing trees and wearing pants and shorts. I felt in limbo because the boys never really accepted me and the girlie girls were a bit afraid and disdainful. They didn’t trust me because I didn’t want to play with them. My brother came home from college the summer I was 7. It was hot, and he ran around shirtless. I was hot, too, and I went running around shirtless until my mom took me aside and said it wasn’t okay. I was getting older, she explained, and girls don’t do that. I was mad. Why could my brother go without a shirt and not me? That’s when it hit me there were different rules for boys and girls. It wasn’t fair!

Be sure to LIKE the page at Facebook.com/100yearsinthelife to be eligible for the May drawing for a free book. Newsletter subscribers will have another chance for a drawing in June! (Subscribe on the home page at www.suzannesherman.com).