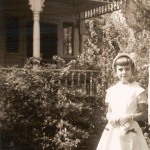 Belva Carole lived in two different worlds in this part of the Old South, the city world in Savannah and the country world two hours away, in Garfield with her grandmother. School days in Savannah meant homework after school for Belva Carole and her two brothers until Mom got home from work — she taught high school English — and they could go outside and play games like Kick the Can, King on the Mountain, Mother May I?, and Hide and Seek. But every other weekend and all summer long she got to go where every day was play.

In Savannah I heard a lot of cans being opened for dinners — grits, canned salmon, canned vegetables. In the country, we had fresh produce from the local farms — corn and crowder peas, butter beans, field peas, tiny greenish white acre peas, peaches and blackberries. We ate hot biscuits with cane syrup made from the local sugar cane. And that was before the real dessert. You didn’t have a meal without dessert at my grandmother’s.

Dinner was the big meal and it was in the middle of the day. You’d have fried chicken or a roast or pork chops and biscuits or mashed potatoes, at least one or two vegetables, like fresh creamed corn and crowder peas. And then came dessert. There could be seedless blackberry cobbler I helped my grandmother and Inez bake after we picked the berries in the morning, or sour cream pound cake, banana pudding, or Devil’s food cake. The evening meal was leftovers from dinner.

Anyone could show up at our noon meal and eat with us. My friends could stay if they were over, no problem. You’d share your food with people even if it meant being careful to take just enough so everyone could be fed. My grandmother and her hired cook, Inez, were known for their cooking throughout the county, so when my brothers and I were in town, kids liked to come over to eat with us. Grandma would say, “Well, of course, come on in for dinner.”

My grandmother and Inez were friends growing up, and they cooked together most of their young lives. Now, Inez helped in the kitchen with everything, including plucking chickens. When Inez made biscuits I got to help. She let me make mama, papa, and baby biscuits, but the best part was licking the bowl. Sometimes I was sent to feed the chickens and gather eggs from the barn, which was an honor even though I was pecked at. And I felt truly grown up shucking corn or shelling crowder peas and butter beans sitting in rocking chairs on the front porch with the women.

My grandparents built a big Victorian house when they were married at the turn of the century and that’s where my uncle, aunt, and mother grew up. I thought my grandparents were rich because the house was huge! (They weren’t; my grandfather was a postmaster.) It had a tin roof with seven gables, a wrap-around porch with gliders and swings, fourteen-foot ceilings (to cool the house some in the heat), and floor-to-ceiling windows. There was a parlor with a piano, huge bedrooms, a dining room, breakfast room, kitchen, bathroom, back porch with a well, and a two-seater outhouse. In Savannah we lived in an 800-square-foot house and I shared a small bedroom with one of my brothers.

Summers were hot and muggy and there was no air-conditioning in our house in the city or the country. In Garfield, we’d put on shorts and halter tops and play in the sprinklers on someone’s lawn or make tents out of porch swings, ride bikes, walk to the filling station to get a nickel bottle of Coke and some boiled peanuts. Sometimes we’d walk down to the one general store, next to Granddad’s post office, to buy some penny candy. Everybody had front porches with rocking chairs and we knew everybody’s name. You’d wave as you passed, dip your head and say things like, “Howdy, Miz Caroline. G’morning, Mr. Raymond.”

Stay posted for the NEXT sneak peeks into “100 Years in the Life of an American Girl” before it publishes (the 1990s and 2000s). Publication’s getting closer! Be sure to subscribe to my newsletter for publishing updates, book pre-order info and to enter the drawing held this May for a FREE BOOK.