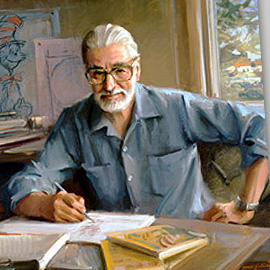 The stories of famous authors being rejected before their rise — and sometimes to legendary status — are so eye-opening I have to share two lists with you.

This first list tells you not only the writer’s name and book rejected but how many times it was rejected. Missing on here is Stephen King’s history, but you can read about it in his memoir, On Writing: A Memoir of the Craft. It is the only book by King I’ve read, and the best book on the craft of writing I’ve ever seen. And his autobiographical tale of living in a trailer park and sending out short stories year after year — until the day that phone call came — is a testament to persistence.

And there’s more. I trust you’re sitting down.

1. Dr. Seuss: The legendary children’s author Dr. Seuss received a famous rejection letter for his book, And to Think I Saw it on Mulberry Street. The publisher indicated that it was “too different from other juveniles on the market to warrant selling.” In hindsight, it’s easy to see that what the publisher saw as a problem, readers embraced, as Dr. Seuss’ quirky tales have been beloved for generations.

2. Jack Kerouac: In Jack Kerouac’s case, the rejection letter pointed out exactly what made his writing so strong. It was written, “His frenetic and scrambled prose perfectly express the feverish travels of the Beat Generation. But is that enough? I don’t think so.” Clearly, Kerouac’s personalized representation of the Beat Generation was enough, more than enough, to become embraced as classic literature.

3. Kurt Vonnegut: The beginnings of Slaughter-House Five were relegated to a brief “summer house-cleaning” reading of manuscripts, and subsequently written off as not compelling enough for acceptance. But it seems that Vonnegut learned from the experience, further developed the story, and went on make it his most influential and popular work.

4. Ayn Rand:  The Fountainhead, Ayn Rand’s first major literary success, was rejected by 12 publishers, one of whom remarked, “This is a work of almost-genius — genius in the power of its expression — almost in the sense of its enormous bitterness. I wish there were an audience for a book of this kind. But there isn’t. It won’t sell.” It is clear that Rand took this concern to heart, as she insisted upon more publicity for this novel than her previous work. The book’s sales grew by word of mouth and reached The New York Times bestseller list.

5. Frank Herbert: Although some editors are certain in their assertions, Frank Herbert’s rejection letter for Dune indicates that often, publishers have a difficult decision to make. One editor’s letter includes the comment, “I might be making the mistake of the decade, but…” in his rejection. For a great book, a “no” often could have been just as easy as a “yes.”

6. Jean M. Auel:  Jean M. Auel is famous for the extensive research put into her novel, The Clan of the Cave Bear, going so far as to join a survival class to learn aboriginal skills. In one rejection letter, Auel was told, “We are very impressed with the depth and scope of your research and the quality of your prose. Nevertheless … we don’t think we could distribute enough copies to satisfy you or ourselves.” Although Auel’s book was ultimately rejected, we have to point out that dedication and attention to detail are elements that publishers can appreciate.

7. Edgar Allan Poe: As one of the earliest American writers to embrace the short story, it was difficult for Edgar Allan Poe to get started. One publisher rejected him not for his writing, but for the format, asserting, “Readers in this country have a decided and strong preference for works in which a single and connected story occupies the entire volume.” But as Poe persisted and reached publication, it became clear that his work met a need that was not being satisfied.

8. Richard Bach:  Bach’s tale, Jonathan Livingston Seagull, told from the perspective of Jonathan the seagull himself, was certainly an original concept, but not everyone embraced it. Rejected by several publishers before reaching Macmillan, one said that “Jonathan Livingston Seagull will never make it as a paperback.” But the book did make it, becoming a bestseller with more than a million sold in 1972. Perhaps this publisher just wasn’t ready to embrace Bach’s original concept.

9. Pat Barker: English novelist Pat Barker is no stranger to rejection after trying to get her first novel, Union Street published for 10 years. It was written off as “bleak and depressing.” Barker’s first three novels were never even published. But the author says that she embraced the rejection, learning that she needed to work harder to find her voice: “[Those novels] didn’t deserve to be [published]. I was being a sensitive lady novelist, which is not what I am. There’s an earthiness and bawdiness in my voice.”

10. Tony Hillerman: Although award-winning author Tony Hillerman’s most famous series was about the Navajo Tribal Police, he was once told “to get rid of all that Indian stuff.” Hillerman’s vision was simply not right for a publisher that just wasn’t ready for it, and this bears a lesson for writers whose ideas have not yet been embraced.

11. Daniel Keyes: Editors had their own ideas for making Flowers for Algernon a better story, but Keyes simply didn’t listen. Influential editor Horace Gold said to Keyes, “Dan, this is a good story, but I’m gonna tell you how to make it a great story: Charlie does not lose his intelligence; he remains a super-genius, and he and Alice fall in love, they get married, and live happily ever after.” But Keyes did not change the ending, and even returned the advance he’d been given, sticking to his guns and remaining true to the story, recognizing that even the advice of trusted advisors isn’t necessarily correct.

12. George Orwell: George Orwell had great difficulty finding a publisher for his anti-Soviet novel Animal Farm. One publisher rejected the book, advising Orwell, “it would be less offensive if the predominant caste in the fable were not pigs. I think the choice of pigs as the ruling caste will no doubt give offense to many people, and particularly to anyone who is a bit touchy, as undoubtedly the Russians are.” But Orwell stuck to his guns and eventually published a story that was clearly unconcerned with being offensive.

13. Jack Canfield and Mark Victor Hansen: Publishers in New York rejected Chicken Soup for the Soul, remarking that it was “too nicey-nice” and that “nobody wants to read a book of short little stories.” Perhaps some publishers are a tad bit too cynical for their own good.

14. Tim Burton: At the age of 18, famed director Tim Burton submitted an illustrated children’s book, The Giant Zlug to Disney for publishing. It was rejected, but the letter included some very helpful constructive criticism. It seems that Burton took it to heart, and three years later, after graduating from CalArts, he was hired by Walt Disney Animation Studios.

15. Gertrude Stein: Sometimes rejection letters are polite and helpful, but sometimes, it’s clear the editor spent more time writing the letter than reading the work. Arthur C. Fifield in London wrote a rejection letter mocking Stein’s signature prose, clearly putting more effort into the letter than he did into giving Stein’s manuscript the time of day. We’re not sure exactly what the lesson is here, except perhaps that editors can be real jerks, even to the most legendary of writers.

16. Chuck Palahuniuk: This author’s novel, Invisible Monsters, was widely rejected for its disturbing content, dubbed “too dark and too risky.” But instead of taking the publishers’ advice, Palahuniuk took their comments and stood them on their heads, taking his next novel, Fight Club to the opposite extreme. He purposefully made it “even darker and riskier and more offensive,” sending it to the publishers who at the very least wouldn’t forget it. It turns out they loved it.

18. Nora Roberts: Nora Roberts is now a bestselling romance novelist, but she’s seen her share of rejection, particularly when submitting to Harlequin. They started out with the standard rejection letters for her, but one came with a personalized note that Roberts recalls as her “favorite rejection of all time.” She remembers, “I received my manuscript back with a nice little note which said that my work showed promise, and the story had been very entertaining and well done. But that they already had their American writer. That would have been Janet Dailey.” Rejection doesn’t always mean your work isn’t good enough; it may just mean the publisher has already filled a quota.

19. Anne Frank: The Diary of Anne Frank is one of the most well read books of all time, and was even described by former First Lady Eleanor Roosevelt as “one of the wisest and most moving commentaries on war and its impact on human beings that I have ever read.” But publisher Alfred A. Knopf rejected the work as dull, “a dreary record of typical family bickering, petty annoyances and adolescent emotions.” We’ve learned that people actually do want to read that record when it’s as compelling as Anne Frank’s.

20. F. Scott Fitzgerald: The Great Gatsby was rejected with the advice, “You’d have a decent book if you’d get rid of that Gatsby Character.” Fitzgerald was wise to ignore this comment, keeping Jay Gatsby around to become the archetype for self-made men.

The message? Keep practicing your craft, learn from good teachers, hire a good writing coach, and Never Give Up.