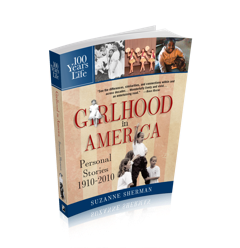 There’s so much to learn from and enjoy in these 56 lively personal stories from around the country and throughout a century — from 1910 to 2010. It’s a new way to understand life.

Daily life is different in the early years of the 20th century, when indoor plumbing didn’t exist yet in homes and schools. But change happens fast after cars and electricity come in, and the pace picks up with the end of WW II.

The 1960s turns culture upside down, and some of these girls were there for it, as kids absorbing changes this country had never seen before. Racial diversity runs through the pages.

In the 1910s chapter you’ll read the words of a Hungarian immigrant chasing horse-drawn fire engines in NYC.

In the 1920s chapter you’ll hear from the daughter of immigrants from Eastern Europe facing the KKK in Indiana in the 1920s and read a fun story from a girl who climbed trees wearing bloomers under her skirt in Indiana.

For the 1950s, there’s a story from a Chinese American living in Texas as a child under 13.

And there’s so much more.

Also included for every decade

I felt like I was in a time machine and enjoying every moment. — Nora H.

The historical perspective and the personal stories weave together a complex and fascinating tapestry. — Mary C.

Fun and profound, a treasure for memoir writers. — Elaine P.