Easy Ways to Enliven Your Writing 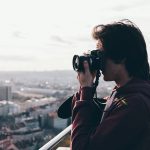 You’re at the movies and the lights dim. A camera pans a cityscape. This is called a long shot. There’s no action but you get a sense of a location. Next, the camera moves in, focusing on something specific, maybe a particular building in that cityscape. The camera moves in closer still, focusing now on a window in that building. We enter that window to see a young woman pouring a cup of coffee in the kitchen when there’s a knock at the door. A scene is ready to begin. We know the context of her apartment in a cityscape, we know the time of day and the weather (helping create mood or give tone), and we’re eager for the story to start.

In memoir, as in movies, narrative supplies the long shot, the wide-angle view. It tells us the way it was on a regular basis, it moves time along (two years can pass in a sentence), it gives background that scenes don’t supply. Narrative gives detail by telling. Scenes are the close up, the one time, one day. They move the story with more detail, by showing.

In Memoir You Want to Show AND Tell

New memoirists tend to write in narrative only. It’s familiar. We write letters or long emails in narrative. We converse in narrative. We explain, describe, recount what’s happened, we don’t write scene to re-create moments that add dimension by showing characters in action. When you write memoir, strive to bring “what happened” to life with scene AND narrative so readers can “be there” up close as they follow your story.

This week, read a recent piece you’ve written all the way through—a short memoir or a chapter from a book you’re writing. Read it on your computer or print it out to read it with a pen in hand.

1. Notice where you can add short scenes to enliven the narrative and help bring a reader “in”. Remember, even single lines of dialog can animate.

2. Look for places you can add details to make the narrative more vivid and where you can change generalities into specifics. Use a light touch with this; don’t overload with details. But remember, we live in a world of specifics. We don’t just see flowers, we see daffodils and daisies. We see a brooding January sky, not just a winter day.

3. See where you can include a sense of location, not just the names of places (“New York” or “my street”), but a few of the essential details that take a reader there.

Take it slow. Use that smaller paintbrush to add dimension to the broad strokes of color as you write.